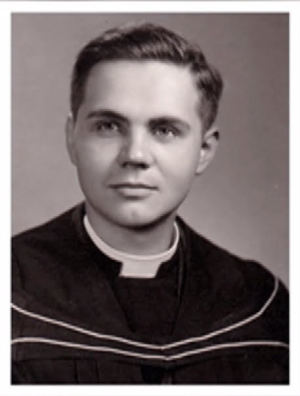 John Tolson Townsend was born in 1927 in Halifax, Nova Scotia, of Canadian parents, but he grew up in the United States. Before her marriage in 1926, his mother taught piano at the Halifax Conservatory and had her son studying piano from the age of six. The result was not so much an ability at the keyboard, but a love and understanding of music that has continually enriched her son's life. His father was an Anglican clergyman who was ordained in Dawson City in the Canadian Yukon Territory, before the First World War and during the Yukon gold rush. After the war, his father served in a large parish in Halifax but longed for further intellectual study. He therefore resigned from his parish in order to attend Harvard University, and began studying for a doctorate at the age of thirty-nine. While at Harvard, he served in a small parish in Rhode Island where he worked the rest of his life. Unfortunately, his parish work was so successful that after receiving his PhD in medieval history he never was able to pursue a teaching career in a university. Nevertheless, his appreciation of the intellect was instilled in his son, John, and has remained a continuing influence throughout his life. He also steered John’s education so that he learned the languages necessary for advanced study in the arts, namely Latin, Greek, French, and German, but not Hebrew.

John was reared in Rhode Island from the age of six months. He mostly attended public schools in Pawtucket through grade eleven. Then, having turned sixteen, he was able to earn enough money and a scholarship to enter Moses Brown, a Quaker prep school in Providence, RI. After graduating from Moses Brown, he attended Brown University, where he earned an honors degree in ancient, classical languages. From there he studied theology at Wycliffe College, an Anglican seminary at the University of Toronto, from which he received his LTh (License of Theology). After his ordination to the priesthood in the Episcopal Church, he entered Harvard Divinity School to study the New Testament. From there he earned an STM. (Master of Sacred Theology) in1953 and a doctorate in New Testament in 1959. Following two years of parish work, he accepted an offer to teach New Testament and biblical languages at the Philadelphia Divinity School, which merged into the Episcopal Divinity School in Cambridge, MA. During his teaching years he also studied at the Ulpan Etzion and Hebrew Union College, both in Jerusalem. Moreover, he taught for a semester at Brandeis University as a visiting professor.

Following his official retirement in 1994, Dr. Townsend also taught Jewish studies at Harvard Divinity School for fifteen years. He has always been active in Jewish-Christian matters and has been a contributing member of the Christian Scholars Group on Christian-Jewish Relations, serving one year as its chairperson. Apart from his published books and numerous articles, he has read many papers at other learned society meetings, including the Society of Biblical Literature and the Association for Jewish Studies.

Dr. Townsend's interest in Jewish Studies came about by a series of fortunate accidents. He had avoided studying Hebrew in Seminary, and while studying for his doctorate at Harvard, he limited his study of Hebrew to the one-year minimum that his degree required. Then two years after receiving a doctorate in New Testament Studies, he found himself as one of two nominees for a position teaching New Testament and biblical languages at the Philadelphia Divinity School. When he realized that he was expected to teach Hebrew, he decided  to recommend the other nominee for the position; however, when the other nominee decided to teach elsewhere, Dr. Townsend was offered and accepted the position in Philadelphia in spite of his minimal knowledge of Hebrew. He found that he had to relearn Hebrew along with the students of his first class. Then when the time came for his first Sabbatical leave, he obtained a fellowship to study in Israel. There he not only greatly improved his knowledge of Hebrew, but he learned how to teach the language more effectively by using Israeli methods. What was more significant for Dr. Townsend, however, was that he learned to appreciate Judaism in general and rabbinic literature in particular, both for themselves and as an essential tool for interpreting the Christian New Testament. He learned to read the New Testament, not as representing a separate religion, but as a Jewish sectarian supplement to the Hebrew Bible. That experience has continued to influence his writing and teaching to the present

Scholars may well remember Dr. Townsend because of his translation of the Midrash Tanhuma (Buber). He may be remembered more widely because of his rewriting of the passion narrative of Jesus without anti-Jewish implications. However, his most important contribution to Christian and Jewish scholarship will likely lie in his recognition of the importance of the very anti-Roman School of Shammai. His two short essays on the subject show, not only that early Christianity had much in common with the Pharisees, but that it tended to follow the School of Shammai rather than that of Hillel. In other words, while Rabbinic Judaism grew out of the school of Hillel, the earliest Christians favored the school of Shammai.

A funeral and burial service will be held at 10 AM at Grace Episcopal Church for both John and Mary on Sat Sept 18, 2021

To send flowers to the family or plant a tree in memory of John Tolson Townsend, please visit our floral store.