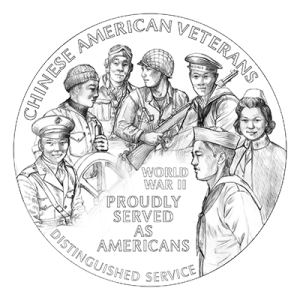 It is with great sadness that the family of William Seam (Simmy) Wong shares the news of his passing on May 12, 2020.  Having just reached his goal of hitting 100 years of age, Simmy died peacefully at his home in Newton Highlands.

Simmy was born on May 9, 1920 in Boston, Massachusetts, the son of Wong Soon and Toy Lin, and spent his childhood in Boston’s Chinatown. In 1931, after Simmy’s mother had fallen ill, he and his family returned to Ping Tung village, Guangdong, China.  He returned to the United States in his late teens.

In 1943, Simmy was inducted into the army, serving as a supply officer for the 407th Air Service Squadron which supported the 14th Air Force's famed Flying Tigers.  His tour of duty sent him all over the world, including Africa, India and China.  After the war, Simmy maintained close ties with his brothers-in-arms, referring to them fondly as “the boys.” In 2020, Simmy was one of many Chinese Americans selected to be honored with a Congressional Gold Medal for his military service with the Flying Tigers in WWII.

After leaving the military, Simmy worked in the hotel and restaurant industry, and in the 1980’s, owned his own restaurant, “Wong’s Garden.”  He married Andrea Lam in 1961, and they had 2 children, Michael KP Wong and Cheri-Ann Wong, whom he leaves behind.

He was an avid fan of the Red Sox, Celtics and New England Patriots and often took his children to Red Sox games when they were young.

Community and friendship were always important to Simmy. He was a member of the American Legion Chinatown Post 328 for more than 70 years, serving as Sr Vice Commander in 1948 and Post Commander in 1949. He was also an elder of the Wong Family Benevolent Association.

Simmy was a long-standing member of many masonic bodies and lodges including the Dalhousie Lodge (Master of Lodge in 2003-2004), Rabboni Lodge, Major General Henry Knox Lodge, and The Consolidated Lodge. He was a Shriner, a member of the York Rite and an assistant Tyler for the Scottish Rite Valley of Boston.

Friends and family will remember Simmy as one with a kind and generous heart who was always willing to help out or reach out to those in need.

No matter where he went or what decade of life he was in, Simmy gathered friends easily and kept them close.  He understood the value of friendship and the work it took to maintain those friendships.  He cherished all the relationships he built over the years.

Services and a gathering to celebrate Simmy’s life will be held at a later time when family and friends can come together safely and happily.  Messages of condolence are welcomed at www.eatonfuneralhomes.com

Donations in Simmy’s memory can be made to the Shriners Hospitals for Children — Boston, 51 Blossom St. Boston, MA 02114

To send flowers to the family or plant a tree in memory of William Seam "Simmy" Wong, please visit our floral store.

A Celebration of Life will be held at a later date